What is HDR video?

HDR is an acronym that stands for High Dynamic Range. The core idea behind HDR video is to recreate and enhance image realism from camera through postproduction to distribution and screen. HDR video is a technology for improving the signal that screens receive allowing those screens to render content in a more realistic and spectacular manner.

HDR technology is about color and luminance management in video content. When we talk about HDR content we are talking about brighter whites and darker blacks but also a wider color palette and new ways to add color metadata to video content.

Many TV manufacturers are using the "HDR" seal for their latest models to show that a TV onboards the latest video technologies but know that PC monitors, tablets and smartphones can also display (or capture) HDR content. Essentially anything that is a screen can be HDR ready.

Note that HDR technology is generally associated with UHD (Ultra High Definition a.k.a. 4K or 8K) content and screens.

Here is a picture that shows the difference between SDR & HDR technology: 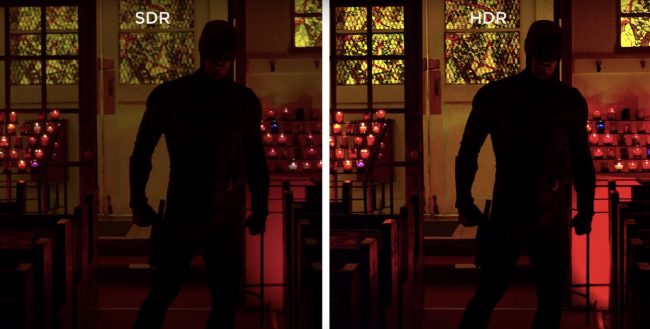 So what is a nit then?

Nits are numeric representation of the peak white color volume, a.k.a. luminance, measured in candelas per meter squared (cd/m2). In real life, HDR screens will generally show 1000 nits (LED display) which is a 10x improvement over SDR screens. More premium screens can go up to 4000 nits (OLED display).

Is it really just about luminance?

No. As mentioned above HDR is also about color management. HD SDR video uses a system chromaticity specified in Rec. 709 standard. In theory Rec. 709 standard allows for up to 16.78 million colors (8 bits per color - sRGB).

UHD HDR is associated to a Wide Color Gamut (WCG) defined in Rec. 2100 standard. Rec. 2100 standard is an extension of Rec. 2020 standard that was introduced with ultra-high-definition television. UHD HDR technology can thus define colors in a more nuanced manner with 10-bits or 12-bits per color coding but also with new transfer functions:

With HDR and 10-bits per color you can have up to 1 billion colors and up to 68 billion colors with HDR and 12-bits per color. In real life, UHD HDR screens do not display all colors from Rec. 2100 standard, they generally attempt to display around 90% of the supported Wide Color Gamut. The HDR seal on a screen should however guarantee that your screen can display colors in the Wide Color Gamut color space (Rec. 2020).

Below is a picture that explains the color space difference between Rec. 709 (HD) and Rec. 2020 (UHD) 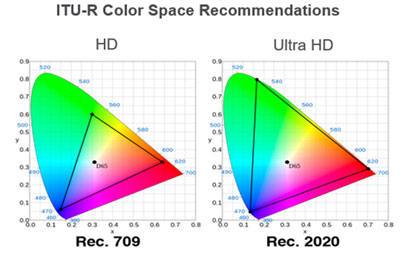 Note that there is another color space called DCI-P3 that acts as an intermediary between Rec. 709 and Rec. 2020. To summarize:

The CIE 1931 color space is, in theory, representing the complete space of colors that the human eye can see.

What are the different HDR formats?

While HDR technology is certainly a significant breakthrough when it comes to reproducing what the naked eye sees in colors, whites and blacks it however comes with a lack of industry consensus around HDR video formats. It is a bit like video codec wars really.

Today we can find 4 main types of HDR video formats on the market:

Yes. HDR video can be played and rendered with Radiant Media Player. You will need the following:

Except as otherwise noted, the content of this page is licensed under the Creative Commons Attribution 3.0 License.